As of now, If you load an openstreetmap file containing linestrings such as highways, lanes or streets, in Marble and zoom to level 11, you will find that the highways or streets are not contiguous and appear as broken.

You will find the roads/streets as broken 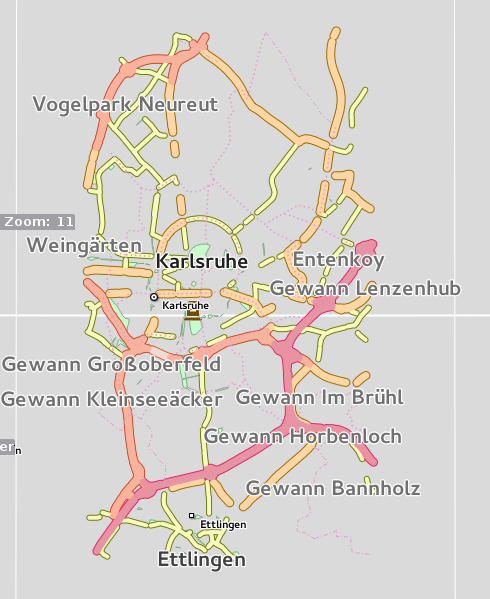 Instead of getting contiguous roads 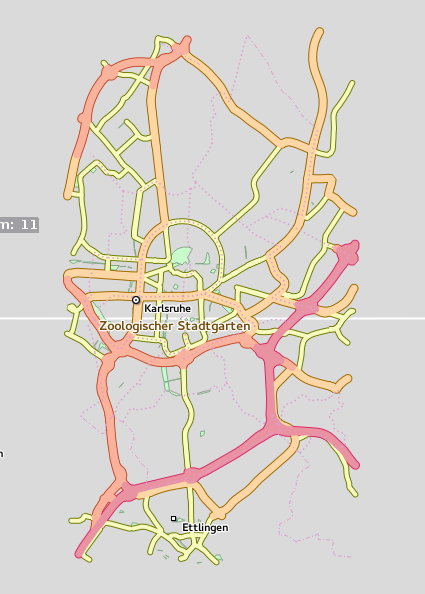 One of the reasons which I can think of and which justifies this highway description using multiple elements is that a street might be called by a certain name for a specific stretch and might be called by some other different name for the remaining stretch. However, at level 11 we are mostly concerned with the type of highways (primary, secondary, motorway , residential) rather than the specifics such as names.

I exploited this way of representation to create a way concatenating module in the existing osm-module tool. For the above example, the module would concat all the 5 OSM way elements into a single OSM way element <1…56>

The above command concatenates all the highways present in the input file and produces a new osm file as output.

Apart from solving the problem of discontinuity, way concatenation also results in data reduction since it is eliminating redundant node references and way elements. This data reduction in turn results in faster file parsing as well as improved rendering performance since now to render a single stretch of highway one only needs to create and render a single linestring object as opposed to multiple linestring objects.

The tricky part of coding this OSM way concatenator is actually coming up with an algorithm which concatenates all the linestrings present in an input file. Finally I and my mentors Dennis Nienhüser and Torsten Rahn were able to come up with a working algorithm for concatenating osm ways of a file in reasonable time (approximately O(n) time).

The algorithm utilizes a multi-hash-map to bundle together OSM way elements which share a common starting or terminating node. This multi hash map has nodeID’s as keys and WayChunk’s as the values. The idea is that at any given instant, this map will contain the starting and ending point of the ways which have been evaluated till now, as keys and the corresponding way chunk as the value pointed to by these keys. Now whenever we encounter a new way, and if it’s starting or ending node matches with any of the existing way chunks as well as the type i.e. GeoDataVisualCategory of the way matches with the type of the way chunk, then this way is added to the way chunk and the values of the map are adjusted so that the map’s keys are the starting or ending nodes of some way chunk and not the intermediary ones. This way, eventually, we are able to concat the multiple small OSM chunks of highways, railroads into singular way elements.

The reason we are using multi-hash-maps instead of regular hash maps is that at a particular node, two or more highways(linestrings) of different types may emanate or terminate. Hence a given node may be associated with two or more way chunks having different type(GeoDataVisualCategory).

The algorithm in more detail is described below:

The first image having discontiguous highways represents the raw input OSM file. This file has 2704 ways in total and has a size of 4.7 MB

The way-concatenator reduced the number of ways to 812 and the size to 2.9 MB. The second image having contiguous roads represent the output of the way concatenator.

If we remove the redundant nodes from the above output using the node reducing module described in the previous post, we get a resulting file having a size of 2.5MB. This node reducer removes 15146 redundant nodes (keeping the resolution at level 11).

If you suspect that due to node reduction there will loss in quality of rendering, then look at the below rendered image and compare it with the above ones. 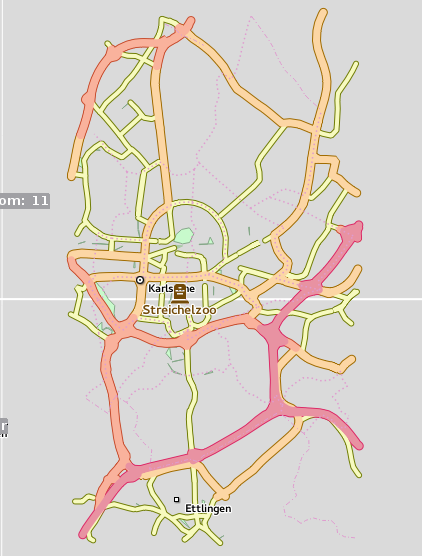 The node reducer and the way concatenator have resulted in a size reduction of approx 46% for the above sample without any significant loss in rendering quality.